There’s a day-to-day pattern in most people’s lives, and I’m not an exception. Like a lot of people in this business, I study individual companies, individual macro data points, and so on. I throw them on the pile and think about if and how that data changed anything.

It’s always good to pull back and look at the bigger picture, as well. I have that scheduled for the weekend, but I also try to look at events through a wider lens when events get more chaotic, like we’ve been seeing lately.

Markets can be fairly described as chaotic. Not so much in terms of volatility, but in terms of confusion. For instance, headline inflation is roaring ahead to peak numbers in this cycle, but the inflation trade has received some real body blows. The energy sector, as an example, is down 26% from the top.

It seems like every piece of news is getting pounced on. Analysts downgraded the semiconductor sector. Sell! Nancy Pelosi bought millions in Nvidia and started getting behind legislation to help the sector. Buy! Plenty of stocks and sectors are bouncing up and down quite a bit, based on the latest morsel of news, or options flow, or perhaps nothing at all.

That’s what happens in a transition. The market spent a lot of time worrying about how inflation was going to make interest rates soar. Now, looking at something like the Eurodollar curve and the brilliant, if complex, work of Jeffery Snider, we seem to have gone too far in one-upping rate hike expectations and are now competing for how many rate cuts we’ll get next year. If that sounds a little crazy to you, that’s exactly my interpretation of what the Fed’s Bullard said this week. Crazy like a fox. 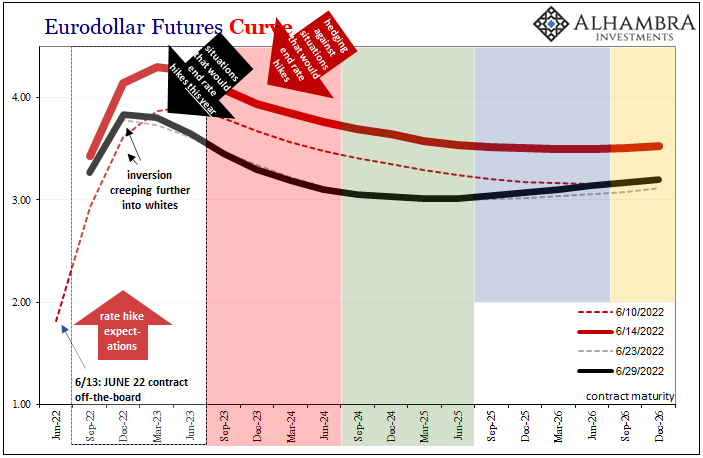 If the inflation trade has played out, what’s next? Chaos apparently, considering recent, directionless market action.

Two basic things I do that have helped in life and markets is to think about second order effects and to sit back and ask, after coming to a conclusion, does this make sense?

In that vein, what are the second order effects of interest rate hikes? The big, widely recognized one is a recession. Raising rates slows down the economy. Raising rates a lot slows the economy a lot, and in this case, a recession seems unavoidable. People are often slow to admit to an unhappy reality, but in my mind, that’s just giving ample opportunity for us to get our positioning right. Admittedly, a lot of big moves have already happened, like unprofitable tech getting crushed, but the market isn’t close to pricing in a recession. We can get there first. Not at perfect prices, at this point, but there’s still time to get reasonable prices, and that always beats denying reality.

Next, does that conclusion make sense? Are we entering a recession? I talked about that in last week’s blog but the basic answer is absolutely, it’s just a question of time. To trot out a chart from last week, here’s a (slightly dated) Bloomberg estimate of recession probability at near 100%. 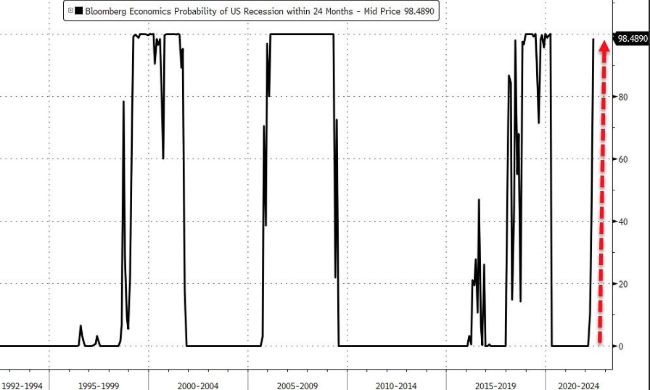 Transitions from one theme to another are generally chaotic and confusing. In this case, the idea seems pretty obvious and clear to me, but managing these things is hard through all the confusion that comes at us. On Friday, the media, at least, said markets soared as they were cheered by the UMich sentiment survey showing long-term inflation expectations went down. That was a data point Powell explicitly pointed out last month as one cause for the large hike they did. Lower is better, right?

Sure, but you have to put these things in context. In the grand scheme of things, what will this do? With the numbers that have been posted lately, it’s going to be very hard for headline inflation to come down rapidly. While the UMich survey was encouraging, the impact is small.

People are allowed to get excited, but I wouldn’t. As often happens, I don’t even think the media is looking at the right thing for why markets had a good Friday. What I saw was an Options Expiration that crushed volatility as options were closed in a low volume, low liquidity environment. That’s temporary unless you have cause to believe future volatility should stay lower than recent volatility.

Investing may have seemed easy in 2020, but it’s not generally that easy. Environments like this are tough for everybody. They’re volatile, and yesterday’s winner can easily be tomorrow’s loser. You can’t expect perfection, here. A bear market feature is roaring rallies to suck people in and spit them back out. Everyone is going to get hit to one extent or another, it’s just a question of coming out on the other side in the best shape you can be. Keep your head and navigate the noise.