We’ve had quite a bit of chaos of late, between non-Fed banks shifting a little towards protecting their economies and some poor earnings reports from large companies. Frankly, while I think there are still fundamental problems that will have to be dealt with eventually, I’d also say we haven’t seen a fraction of the problems that will be created by the Fed slamming the brakes so hard.

In short, this is chaotic, and it’s hard. It’s easy to imagine we get a pivot, but it’s hard to say when exactly that happens, and if we get that pivot in the next few months. It’s also easy to imagine we will see a second crash when the pain from the Fed tightening really hits next year.

Ultimately, what can we do with this chaos? For me, I like to think in terms of risk/reward. In broad brush strokes, let’s say the potential upside is 4,000 on SPY, and the potential downside is 3,000. Maybe those numbers should be shifted a hundred points either way, but both numbers do have options influence.

At, say, the roughly 3,900 you’re currently paying, it just doesn’t seem to me like there’s much easy upside left. Realistically, what would it take to get more upside? Earnings season has been disappointing so far. Let’s say we did get some kind of real pivot sign at the Nov. 2nd FOMC meeting. What’s your upside after speculators already drove this up from 3500? The risk/reward to YOLO anything here just doesn’t seem very attractive.

I should pause to point out plenty of people disagree with me, here. Plenty of large banks have hopped on this recent rally. The claim is that CTAs and companies will be buying until year-end, the Fed is set to pivot this week, and we get a split government. Even then, though, the bulls are talking about getting to 4,000 to 4,150, not exactly a huge gain from here.

It’s also more realistic. I know there are central banks that have performed what could be called a pivot, but they all happened under duress. The BoE supported their gilt (bond) market because it was collapsing and creating an existential crisis for pension plans. The BoJ is trying to maintain yield curve control (YCC,) forcing low rates. The BoC (Bank of Canada) has a very stressed fiscal situation vs. the rest of the world, so they’re pretty fragile. If the Fed pivots soon, they will also likely have to see something break. 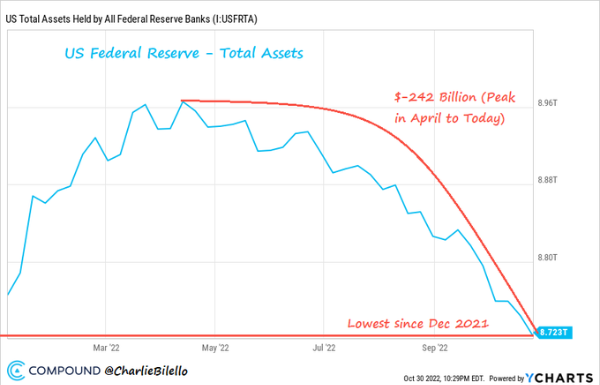 As I’ve said before, a pivot can happen, but trying to anticipate it is useless. Duress implies major problems, which would create lower asset prices. Without that stress, there’s no motivation for the Fed to do anything at all with the data available.
Thus, right now, all we can do is stay defensive and watch. Considering the Fed has generally indicated they need to be patient on inflation to make sure it’s well and truly dead, it’s also hard to get excited about individual data points. Let’s say non-farm payrolls, out Nov. 4th is weak. That would be encouraging for the bulls, but are we sure it would change the pace of anything? I expect there’d be short term excitement, but the Fed might come out a day or two later and say their hiking intentions haven’t changed.

Unfortunately, if we expect to get a good and lasting pivot soon, it will likely involve a crisis, as happened with the other central banks. Because of that, the incessant anticipation of a pivot seems like a fool’s errand. If a sufficiently bad crisis hits, then we can get more interested. What that effectively means is that the closer we get to 3,000, the more constructive and aggressive we can get. A good first step would be to see investors stop chasing high beta and move more towards defensive names.

The main event this week will be the FOMC meeting. There seem to be plenty of people pretty confident there will be a pivot, despite no indication of such by the Fed. Yes, we can talk about the WSJ story, but you can also say the Fed would much rather have a managed decline than a panicked crash. A bit of a rally relieves the pressure but doesn’t break the downtrend.

The FOMC meeting will tell markets quite a lot. If the Fed does, in fact, really pivot, then we’ll have to change what we’re doing, but if the pivot fails to appear, chances are the market positioning will have to change. Given the data currently available, I’m pretty comfortable with our positioning, but as usual, if conditions change, we’ll change.