Many Americans believe that Warren Buffet is the best investor of all time. The 87-year-old has achieved an average of 19.1% compounded annual return for Berkshire Hathaway investors each year for the past 53 years.

Those type of returns are cause for both institutional and retail investors to pay attention to Warren’s annual Shareholder letter which he releases each February to recap his company’s investment performance and outlook for the next year.

Considering Warren’s success since he started from humble beginnings and has grown to become one of the world’s richest men, he’s someone worth listening to. However, his wisdom doesn’t only apply to investment ideas, but can also be used for retirees looking for peace of mind about their ability to never outlive their assets.

In this article I’ll provide 6 lessons from Uncle Warren’s latest shareholder letter and how they can help guide you with your retirement financial plan.

If you’ve been avoiding any form of financial media over the past 9 years, you may have missed how dependent asset markets have become on central banks. These quasi government agencies have inflated their balance sheets to unprecedented levels to provide “monetary support” to “economies”.

While the US Federal Reserve is the biggest central bank involved, others including the Swiss National Bank, the Bank of Japan and the European Central Bank have taken part in this “monetary experiment” by suppressing interest rates and purchasing financial assets. 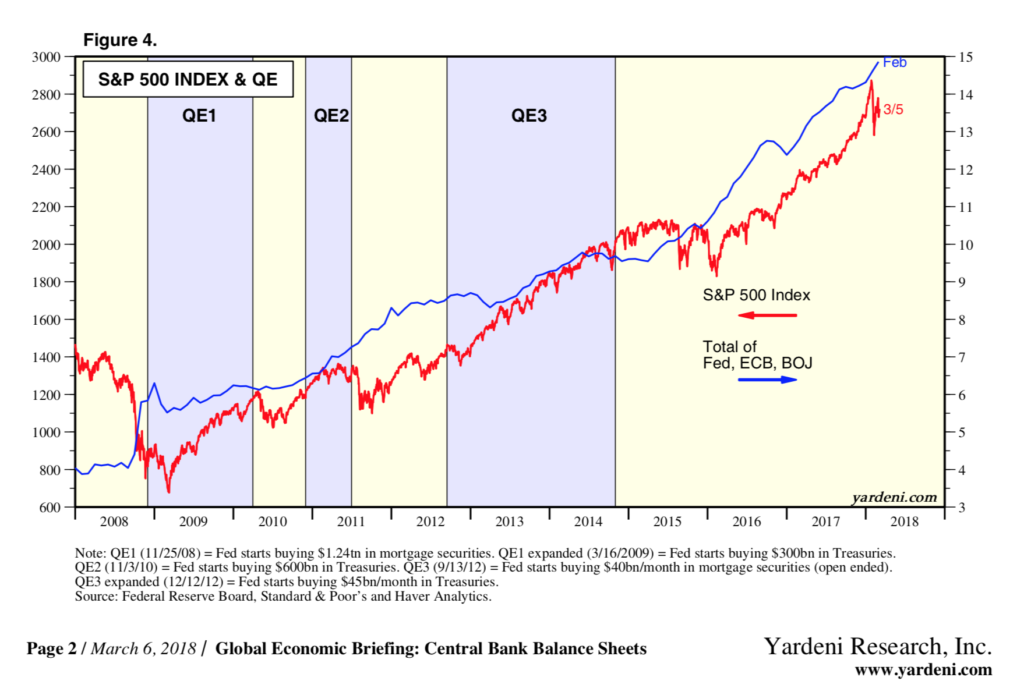 Today, the Swiss National Bank owns about $800 billion dollars of foreign equities and bonds. Contrast that with the Bank of Japan who owned $55 Billion dollars’ worth of ETFs or roughly 74% of the market in October 2017.

These actions have been great for asset holders (investors) as they have inflated the value of these assets. However, this has also distorted the ability of investment managers to properly define risk. It’s also lead to many misguided investments being made by corporate management teams as their personal financial incentives have compelled them to make investments that may not have been as suitable in a market that didn’t offer such cheap debt.

As an investor close to or in retirement you should consider your maximum portfolio drawdown if equity markets were to fall 40 – 60%. If you couldn’t ride this out without adjusting your retirement timeline or lifestyle then it’s time to review your equity exposure.

Berkshire Hathaway is an investment holding company comprised of other companies. The financial engine of Berkshire is made up of Geico and General Reinsurance. Each of these companies insure individuals, businesses and other insurance companies against catastrophic losses.

Like any insurance company, they collect periodic premiums that are put into a pool and invested. A portion of these funds are used to pay claims and the rest generates profit for investors.

This consistent income with a long-time horizon has given Warren Buffet and Berkshire the ability to invest for the long term while navigating the multiple economic downturns that have taken place since 1965.

As a retiree, what is your financial engine that will provide consistent dependable income? For many people their Social Security benefits could be this engine. However, these benefits typically aren’t large enough to cover all your essentials including food, housing and healthcare. As you get closer to retirement it’s worthwhile to define what this dependable income ratio is relative to your core expenses.

A high enough ratio will allow you to maintain peace of mind that your essentials are covered throughout any contractions in the economy or the financial markets. This approach will further provide the ability to take on investment risk that will come with volatility but offer a hedge against you running out of money before you die.

3. Gains from the Tax Bill Were Almost as Much as Operating Gains

The tax bill that Congress passed in December of 2017 helped increase Berkshire’s profits by $29 Billion. Without the tax bill Berkshire would have made $36 Billion in profit.

The lesson offered here is that the more money you keep, the longer your money could last. This lesson doesn’t require a PhD in economics to understand, but it’s worth diving into.

Do you know what your effective and marginal tax rates are? What about what they will be when you retire? If you can define these values for the first 5 – 10 years of retirement you can identify opportunities to decrease the amount of taxes you pay.

This is significant to do before you retire because at age 70 ½ you must begin withdrawing Minimum Required Distributions from your 401(k) and IRA. These distributions are taxed as ordinary income, which can increase your effective and marginal tax rates.

By understanding what your Marginal and Effective tax rates are before retirement, you may be able to start withdrawing assets from your tax deferred accounts (IRA & 401k) if you will have less ordinary income. Effectively you could restructure how much money is going to subject to ordinary income taxes by paying taxes at a lower rate than what you would be required to once you reach age 70.5.

Since Warren believes that company prices are expensive it makes sense that he would want to start raising cash so that he has money ready to deploy when said companies go on sale. What’s interesting to note is that Berkshire increased cash by $29.6 Billion or roughly 35%.

This money doesn’t just go to the bank. Instead, Berkshire invested these funds in cash and Treasury bills with an average maturity of 88 days.

What amount of cash does your portfolio hold relative to your total investable capital? Have you (or your financial advisor) defined when that money would be deployed into equities? These are productive conversations to have before a downturn takes place so that you don’t allow the hysteria of the 24 hour corporate media to influence your ability to stick to a disciplined investment plan.

In 2007 Warren Buffet bet a hedge fund, Protégé Partners that an investment in the S&P 500 index fund would outperform the same amount of money invested in hedge funds over a 10-year period.

Warren believes that investors pay too much in fees without an appropriate amount of value delivered in return. His bet allowed him and Protégé Partners to place $318,250 into bonds that would be worth $500,000 each when they matured.

Warren’s advice to investors is to “disregard mob fears or enthusiasms and instead focus on a few fundamentals.” While this advice certainly proved astute over the past 10-year period, I would argue that the Federal Reserve’s decision to suppress interest rates had more to do with the market performance than any other single factor.

Consider that share buybacks have “accounted for +40% of the total earnings-per-share growth since 2009, and an astounding +72% of the earnings growth since 2012.” These share buybacks have occurred thanks to record corporate debt issued over this same period of time. All of this can be laid at the feet of the Federal Reserve. Without the ability to properly assess risk, active managers, hedge funds, had a more difficult time making money.

That’s not to say that Warren isn’t correct with his message to avoid high fees. Too often retirees keep their investments in 401(k) plans with A-Shares that can have up front loads as high as 5.75%. It’s wise to review your investment and management fees in retirement to ensure you’re keeping the lions share of any gains and receiving good value for any advice that you pay for.

The Federal Reserve (Fed) oversees managing interest rates in the U.S. Over the past month they have indicated that they plan to raise interest rates at least three, if not four times over the next year. Historically, interest rate increases have been at .25 % or one quarter of one percent. So, if the Fed keeps their word, interest rates could be .75% to 1% higher by the end of the year.

When interest rates rise, existing bonds lose value. The value is lost only if you want to sell before the bonds mature. If you decide to hold them for the entire term then you will collect the interest payable along with the principal at maturity.

While many people argue they are buy and hold investors, as more income becomes available via higher interest rate bonds, the temptation grows. This results in them selling old bonds with lower interest rates to replace them with higher paying bonds.

As a retiree, it’s key to know key elements of your bond portfolio including: what is your bond duration, average credit quality and maturity. These factors will help you determine your interest rate risk and if you should adjust your portfolio to reduce your overall investment risk.

As you can tell by now Warren Buffet offers great knowledge for retirees. If you found any of these lessons helpful please let us know in the comments below. If you’d like help building your retirement plan or investment portfolio please reach out to us.

Has COVID-19 Forced You Into an Early Retirement?

Has COVID-19 Forced You Into an Early Retirement? Here’s How to Evaluate Your Financial Plan. Dave Abate, CFP®, Senior Wealth Advisor Recently, companies like Delta and Ford have introduced buyout programs to help lower labor expenses amid the COVID-19 pandemic. If you’re on the receiving…
Read more »

Thinking about Cashing Out? Think again

Thinking about Cashing Out? Think again Tony Zabiegala, Chief Operations Officer and Senior Wealth Advisor Warren Buffett is quoted for saying it is wise for investors to be “fearful when others are greedy, and greedy when others are fearful.” There is no denying the fear…
Read more »