Thus, I could claim that the failure to participate fully in the latest bear market rally is no big deal. That’s not really my personality, though. It’s impossible to get everything right, but you can certainly try to improve. How could I have caught this rally better? What made this particular rally so good?

I could also claim that some amount of luck was involved. People invested because sentiment got too bearish, then they caught some good macro news. What can you do, right? I don’t find that answer very satisfactory. There were certainly people who caught this rally. Were they just lucky? I don’t think so.

So, what happened? It’s always easier to figure out events after they’ve already happened, and I’d point out two things that stand out to me. First, the Fed effectively has gotten easier in the last several weeks. Second, volatility has trended lower over several weeks.

On the Fed getting easier, the main path has been the US Treasury draining their balance sheet, down to the roughly $500B level they said they want to keep. The path from almost $1T to $500B has helped create a big party, as it leaves the Treasury balance sheet and goes into the financial system.

The problem with aggressively pricing is that it’s unlikely to continue. The Treasury has said it wants to keep roughly $500B on hand, going forward, so the party we’ve had isn’t going to be repeated. It’s actually more likely to reverse some, based on their quarterly refunding announcement. The only way we’d break that would be if some national emergency forced the use of those funds, and I don’t see anything on the horizon.

Second, volatility (VIX) has also been trending down since mid-June, as investors have taken solace from conditions getting easier and nothing has arrived to sufficiently spook them. 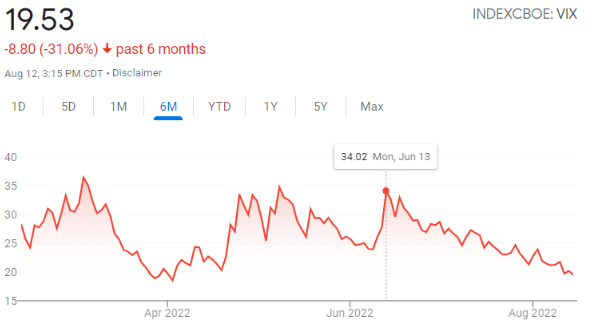 As we wrote about in last week’s blog, lower volatility, if nothing else, allows systematic funds to buy more, helping to drive up prices. Again, the question is how much longer can this complacency last and how much more complacent can investors get?

These two things already happened, and I don’t think there’s much point in trying to chase the moves now. Fed easing is clearly not what they want, they’re pushing back against it, and the factors that created the easing should be over. On VIX, we’re getting close to the lows we’ve seen both this year and in the post-Covid era in general. We could go a bit lower, but the bulk of the move is likely behind us.

I think the best path forward is to take notes, understand what happened, and be better prepared the next time we rally. It’s possible the bottom is in for the market this year, but that still seems very unlikely. Typically, we’d need to see an actual pivot from the Fed to make this rally sustainable.

Otherwise, their tightening actions work on a lag, so we haven’t seen the full effect of hikes and QT, yet. Relatively predictive surveys, such as Leading Economic Indicators and PMIs are still trending down, and that should continue. The most likely path forward, at least right now, is continued tightening in financial conditions and a continued slowdown in the economy.

I will continue to get things wrong but looking at past errors and forming a reasonable basis for how to react better should make us improve. That should make for a better system over time, without panicking into doing something questionable.