We’ve had another nice bounce, and once again, some are wondering if we’ve seen the bottom of the market. Some of the causes of the recent boost we’ve seen in the market may be coming from friendly federal funding to start the quarter. The Fed did not QT at the start of November, with the balance sheet actually up by $2B, at least until the numbers for last week came in. The Treasury account declined by $72B, which goes into the economy. Lastly, $189B came out of the Reverse Repo Program (RRP.) All that added quite a bit of money to the system in a fairly short amount of time.

All that may sound fairly esoteric and wonky, but it’s reasonable to believe that, particularly in a time of low liquidity, these unexpected changes can have an outsized impact on what we see on our screens. We’ve had a trend of easing in what’s supposed to be the era of QT.

Going forward, can we have any insights into those liquidity flows? If they helped push markets up, might they continue for a Santa rally or reverse to put coal in stockings?

We know the Fed and Treasury’s intentions because they’re publicly communicated. The Fed is supposed to drain $97B a month. The Treasury has said they want to build their account back up by about $180B, which is quite a change from the recent drain. All of that indicates liquidity will shift from being surprisingly accommodative to much more restrictive.

The RRP is a wildcard, though, and it’s a big one. A lot of money left the RRP after the CPI report fueled animal spirits. Can that continue, or was it a one-off? That’s really hard to say with great confidence. What we can say is that a continued drop in RRP money coming into the economy would be working against the Fed. We can also say that individual CPI prints have a history of reverting, as we saw in August. Lastly, the trend has certainly been for the RRP to increase over time.

Ultimately, one way or another, the Fed needs to get inflation down, and if investors fight that by flooding out of the RRP and into riskier assets, that will just make the inflation-fighting game harder and last longer.

Right now, investors seem geared up for a year-end rally. It’s unlikely the Fed really wants to crash the markets, but neither can they afford to keep easing financial conditions, particularly at the pace we’ve seen lately. It’s easy to get excited by these bear market rallies, but it’s important to see where dangers can come from.

We can already see this is much ado about nothing, as the balance sheet has started to drop sharply again in the last few days, as federal bonds tend to work on a semi-monthly cycle. It’s not shocking to see little happen for a week or two. If you look at the chart below carefully, you can see that. It’s not a straight line, and there are weeks where you see a countertrend.

What does all this mean? Fundamentally, let’s talk about what’s really going on.

The vast majority of the time, at least for the last forty years, liquidity has been accommodative. It’s like putting a kid on a sugar drip. We’ve constantly been stimulating, and it’s been a great ride. The problem, like with a kid, is when you remove that drip, which is what we’ve been dealing with this year.

That’s why the market is so attenuated to every whisper of liquidity coming back. We have an engine that we understand pretty well when it’s moving forward (stimulus,) but really struggles in reverse. Investors are still eager to get back to moving forward again and have been very aggressive in trying to anticipate it.

Last week, we saw a $23.9B inflow into equities, according to BoA. Investors are chasing hard, still playing the old game. Can this continue? Sure, but for how long will investors fight the Fed?

We don’t know the future, but we can anticipate probabilities. It’s not easy, as this is as much a sociological experiment as it is a mathematics experiment. People get to do what they want, and we get to decide what we want to do with that end result. We try to look at the situation from a variety of angles, and right now, a lot of things are pointing down, both long-term and short-term.

Short term, you have the options market. We’ve spent the last two weeks playing options games. According to SpotGamma, quite a few investors seem to have been primarily shorting calls at 4000 on SPY. This tends to force the SPY up to 4000, as dealers hedge. As of last Friday, that influence is gone, and we start the game again. While we don’t know for sure what the options market will do, it looks likely we should see a potential material reset lower into December OpEx.

Last week, the oil market joined in (below.) Spot oil prices shifted down, which is the price you tend to see on your screen, but the whole futures curve also came down. Some of this is technical, with pipeline problems shifting oil flows and futures rolling off, but I think it’s fair to say this is a corroborating sign that the market thinks there are significant problems ahead. 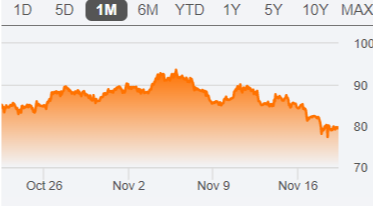 Investors don’t seem ready to give up, so we have these ongoing bear market rallies. Unfortunately, investors are so eager to invest that we haven’t seen a really high-quality chance to invest, where you have the potential to make 30% gains. I’m still hoping we get a good chance, though. If we don’t, we don’t.

Lastly, Zed Francis, CIO of Convexitas, thinks Required Mandatory Distributions (RMDs) are a problem, just like they were in 2018 (see below.) To be fair, Goldman Sachs thinks tax changes make this less of a factor, but in general, the idea is that losses in assets during the year make the RMDs proportionally bigger, much like what happened in 2018. It seems to me like Zed has a point here, and based on how custodians work, from early December to around Christmas could see what amounts to a lot of forced selling in a low liquidity environment. That could help accelerate a decline.

We’re looking for a good opportunity, but once again, there’s no current pressure to chase. We’ll just see what the market gives us. Right now, is a very difficult time, as investor’s urge to chase upside versus a sea of potential problems really widens the range of what can happen.