The market, appropriately, focuses on Core CPI, because that’s what the Fed says they look at. Core CPI saw an unexpected slowdown, going from 5.9% to 5.7% Y/Y. Obviously, that was both unexpected and welcomed.

Other Core-like measures, such as Trimmed Mean, Median, and Sticky CPI also showed improvement. That’s also great, but we’re still way above a rate the Fed finds acceptable, at least without exogenous problems pushing them in a different direction. 5.7% is a long way from 2-3%.

There are also issues in the report. Energy prices had been a big driver of lower inflation, and that impact is slowing down. Gordon Johnson also points out that CPI for health insurance had a periodic adjustment that won’t be repeated, which was responsible for about a quarter of the beat. Lastly, usually these large swings tend to get partially reverted in the next month, so the odds the next CPI surprises to the upside are elevated. CPI was better than expected, but is there really cause for great celebration? 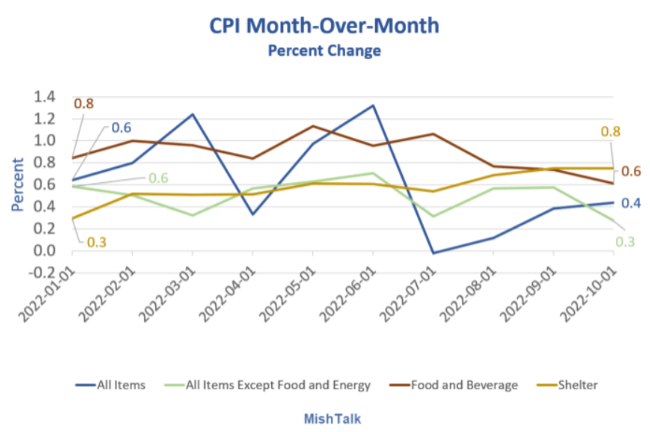 OK, but is any of this really a disaster? To me, the second order effects are the problem. We’re a highly financialized economy, so the reaction to CPI was a giant easing in financial conditions, which goes sharply against what the Fed has been fighting for.

That implies trouble. Presumably, the Fed is going to need to push back on that. Alternatively, they could give up and accept a higher long-term inflation rate. That can happen eventually, but I’m sure 5-6% isn’t an acceptable rate for them, so the reaction to somewhat softer inflation increases the chances of inflation and Fed reaction ahead.

Clients tell me they prefer these blogs to be actionable, so what do we do with this?

The market decided the Fed isn’t going to be as serious about fighting inflation, so the market relaxed and dropped the terminal funds rate. Will the Fed push back against them soon? Rectify the notion? If so, how much of a downside air pocket is there, exactly?

There was an awful lot of short covering last week, and by now we should know short-covering rallies can be rescinded quickly. The market went decidedly risk on, with high beta far outperforming low volatility. The dollar also dropped sharply, to 3-month lows, as the market declared troubles were over.

On the flip side, maybe my concerns are unfounded, and the Fed won’t push back. How much upside could there be? Could we have a date with destiny at the 200-daily moving average at 4080? Could we hit 4200 or 4300?

We’ve played this game at least twice before this year, and both times the Fed informed investors of their hopes. Will we see a different outcome this time? At the least, could the party run a bit longer?

Honestly, this seems virtually identical to what happened in August (highlighted below,) and I could just about copy and paste what I said back then, in the blog On Being Wrong. I expect the same outcome now that we saw then, with the market turning down again. That doesn’t have to happen today, but I’d say the near-term range has more potential downside than upside, here. In the next few weeks, I’d think the upside is to 4100, while downside potential is to 3600, but that can change as conditions change.

There’s also more going on than the inflation call. Like in August, while the Treasury drained its balance sheet, aiding the bounce, they’ve stated that won’t continue. The dollar has plunged, and it wouldn’t be shocking to see some reversion. We also have escalating market stress.

To point out a timely market stress, there’s the latest crypto bust. I could be wrong, but I worry the market is underestimating the fallout there. Sam Bankman-Fried, ordained by some as the JP Morgan of crypto, was outed as a fraud. Lots of people are directly hurt by this. There are the depositors, the people who invested with him, and the people who did business with his associated entities. With leverage involved, how much money essentially disappeared? We’ve already seen what looks like spillover into other asset classes. Would it be shocking to see that spillover effect continue? This story doesn’t seem finished.

Right now seems like a risky time to add to risk-on positions. That could work out, but we’ve moved quite a bit; plenty of things have moved from oversold to overbought. I admit that markets briefly looked stressed, but after a historic two-day rally, that is no longer the case. Much like in August, the primary job in a bear market is to preserve funds, and that’s still our main focus.