There can’t be many people who actively wish for and enjoy a recession, but in this business, it’s much better than not acknowledging reality. Wishful, hopeful thinking has killed many an investment plan. Don’t be that guy.

I try to write these blogs for people who aren’t economic or market experts. There are a lot of details I’m skipping over, and I try to be careful not to lie with statistics. There are plenty of more involved analyses of recession risk out there, but I’d like to think this represents an honest, best-effort attempt at educating people about recession potential and what it means for markets.

How likely is a recession? I like to think nothing in life is certain, but recession seems highly likely, at this point. Don’t just take my word for it. The data from Bloomberg below is a little stale, but recession odds have been soaring again, to a near certainty. Looking back, I don’t see any clear false positives. If anything, you could call it conservative. 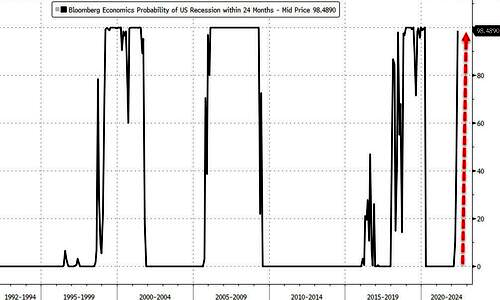 According to that chart, we’re highly likely to see a recession within the next two years. That’s a pretty wide band. Maybe we could keep dancing for a while? Maybe not. A recession is popularly defined as two consecutive quarters of negative GDP. The first quarter had a negative print, and according to the Atlanta Fed’s GDPNow model, the second quarter is currently estimated to print another negative quarter, at -1.2%. 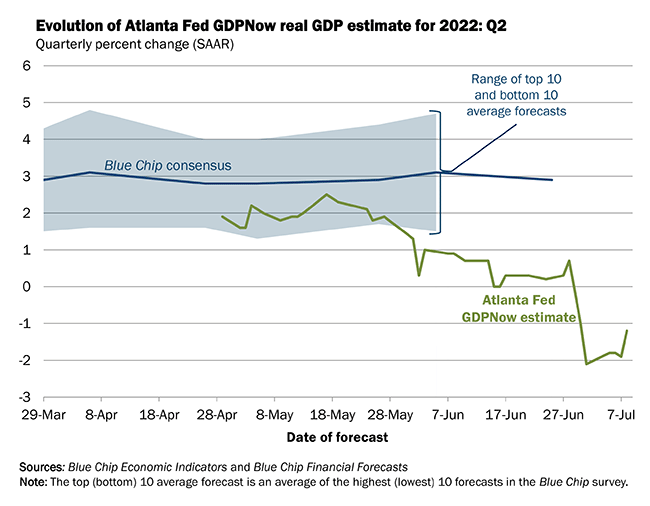 Technically, that’s a recession, assuming Q2 estimates stay down. I view that measure of recession as being more about creating headlines than reflecting reality, though. The NBER, who actually dates recessions, say they look for “a significant decline in economic activity that is spread across the economy and that lasts more than a few months.” They also say that while most recessions are brief, it may take a long time to fully recover.

The NBER stance makes a lot more sense to me, and when I’m talking about recession, that’s what I mean. In theory, we could get a technical recession on July 29th, when the BEA releases the first estimate of Q2 GDP. I only really care about that to the extent it can roil markets. I’m more interested in what a real recession can do to markets, because that’s what I get paid to do, and presumably that’s why you may still be reading.

What Can This Recession Do To Markets?

That’s complicated, and there are many potential answers. In this particular case, there are real complications in the form of employment and inflation.

It’s easy to criticize decisions that have already happened, but plenty of people are now saying the Fed stimulated the economy for way too long. This makes the idea of a “soft landing,” where we have a gentle recession, seem very unlikely. Normally, the job market can potentially act as a cushion, as job creation can soften the blow from the economy slowing down. As you can see below, or presume from anecdotal staffing problems, there’s no room at all for a hiring boom coming to soften a recession’s blow.

Inflation continues to be a real problem, and the bad news for recession risk is instead of inflation being transitory, it’s become sticky. To cut to the chase, while I continue to believe the data points to inflation slowing in the back half of the year, that may well happen at a pathetically slow rate. That could mean huge problems for asset markets.

The nuclear problem is if markets lose their complacency that the Fed can still handle this. Fixed income markets are still priced as if they believe the Fed isn’t going to lose control of inflation as they did around the seventies. If that complacency fades, look out. And if you think that would be bad for Treasurys, you’re right, but how do you think it would be for assets higher on the risk ladder, like stocks?

For what it’s worth, I really don’t expect that to happen, but we have to watch carefully. I think the Fed is keenly aware of that risk, which is why I find the complacency of the stock market shocking. Inflation needs to be stamped out with full force, so we should expect rate hikes and continued tightening to an extent never seen before. Yet investors seem like they’re still drugged from the stimmy era. Instead of seeking shelter, they rush into junk.

That’s a horrible idea. While households and the financial sector seem to have learned their lesson from the Great Financial Crisis, apparently corporations have not. Excluding the Covid mess, they’re as leveraged as they’ve ever been, as they’ve been gorging on free money for years. To add to the trouble, Covid was very good to large corporations, giving them record margins. That was great and all, but do you care to place any bets on what happens to margins in a recession? (Hint: look at the shaded areas in the chart below.) 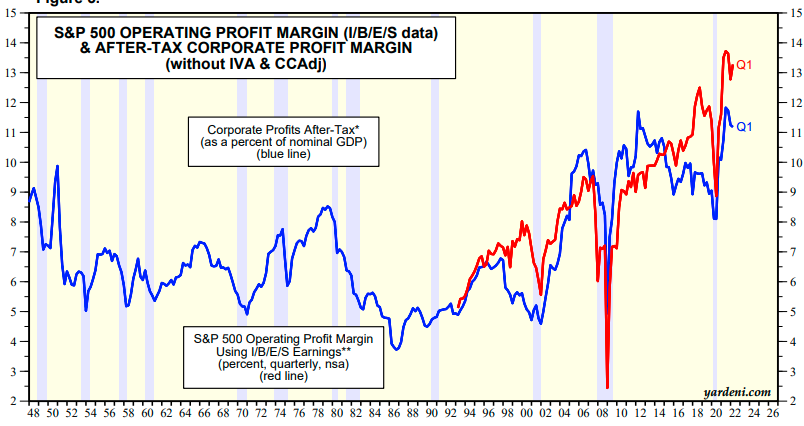 People are allowed to do what they want, but buying junky stocks while corporates are overleveraged and coming off record margins doesn’t strike me as a great idea.

All Is Not Lost

Regardless, your money has to go somewhere. As the market has started to walk away from fearing the effect of inflation to fearing a recession, you’re probably well-served to think about what does well both in that general circumstance and given the current specific environment.

At some point, I would expect traditional recession plays, like gold and Treasurys, to do quite well. I freely admit, I’m stunned that gold hasn’t performed well, thus far. The strong dollar hurts, but that’s not the only factor to look at. That may just mean gold’s gains are rapid, rather than a slower trend up.

In terms of the stock market, I’d more than ever stick to quality, low beta, defensive stocks. Avoid stressed balance sheets and the potential for sharply reduced margins. A lot of companies looked very strong in the Covid era, and we’ll probably be finding out a lot of those aren’t as durable as expected.

Lastly, recessions are a natural part of the market, and life goes on. At some point, the Fed will be able to relax and our investment options can widen. We have already seen some effects of a potential recession, and it’s entirely possible somewhere in the back half of the year we can see a more constructive environment. Better times are coming, and it may not even be all that long, but for now, we can’t anticipate that. The more immediate likelihood is a hard rain’s gonna fall.