There’s a lot of prognosticating going on, as there’s been a lot of volatility. There’s also quite a range to the predictions. As seems common after significant change, many people act highly confident, but with a wide range of answers.

Similarly, is the dollar done going up? If there’s going to be a recession, how bad will it be? Will interest rates come down fast, or slow? There are many, many question marks right now. How to navigate the noise?

As the title of the blog and stolen from Bruce Lee says, “Be like water.” A lot of people seem to be very positive about what happens in the future, and those predictions are all over the place. Now strikes me as a time to be very receptive to whatever form the future comes to us. 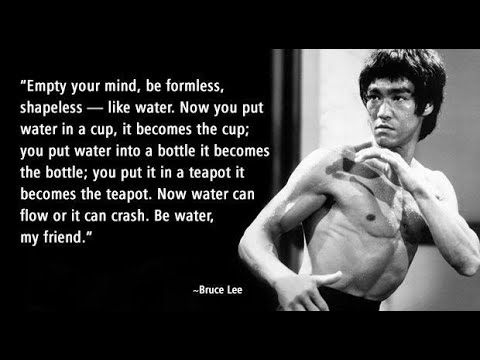 For instance, like a lot of investors, I’ve been hunting for bear market bounces. However, we have a long term bent, so we try not to swing the whole portfolio around week to week. It’s a balance.

We also, cautiously, look into what we can knock out of contention for likely futures. For instance, it’s hard to see how housing rebounds quickly, and the valuations for housing stocks aren’t even very compelling. Unless something dramatic happens, we’re not going to be looking at housing stocks anytime soon.

We’re also allowed to weight likelihoods and look at upside/downside potential. Energy is interesting, for instance. Oil is currently down for the year, while the XLE energy index of stocks is up 44% YTD. I find it a lot easier to be interested in the commodity than the stock. On the flip side, oil often crashes as we approach recession. You can also look at the situation from a different angle. Cameco (CCJ,) the uranium company, is down 5% YTD. Might that be a more interesting way to be involved with the energy space?

We don’t want to hold on to our stance with an iron will. We can change our mind. It would be nice to know exactly what the market will look like a year from now, but right now, that’s a tall order. Yield curves indicate there’s trouble ahead, eventually, but these indicators shouldn’t be viewed as an unchanging roadmap.

Everything can happen next year. Inflation prospects could look very good at some point and very bad at another point. Same thing with the economy. Different assets are likely to look like great choices at different times. We don’t get to pick any of that. All we can see is the evidence that is in front of us and adjust to what comes.

To bring that idea into what’s going on right now, we have quite a bit of data facing us this week. That’s primarily in the form of CPI and the FOMC rate decision. Of course, we have expectations, but what happens with something better or worse? Currently, given market positioning, we’re pretty cautious. That seems very reasonable, but what if Core CPI surprised heavily to the downside and the Fed were to indicate they’re done hiking rates? That seems unlikely and would cause follow-on effects, but we would need to respect that market change.

In the end, though, there are a lot of intelligent, motivated people investing in the market. The very broad consensus seems to be that there are problems ahead, but also opportunities. I think that’s roughly correct, but the shape of how that plays out often ends up as a surprise.

For instance, plenty of energy investors were eagerly holding on to their energy positions with the idea that Russian oil sanctions and a Chinese reopening were bound to lift oil prices. As you can see in the chart above, that idea hasn’t worked out, thus far.

That’s the market, though. There’s likely another highly motivated person on the other side of your investment. They sold what you bought, or vice versa. It’s not fair to assume that they’re just unintelligent or lazy. The market can constantly change in large ways and small, and we need to be like water and try to assume the necessary stance to manage what comes. We are guaranteed to make mistakes, but we need to flow as best we can.