OPEC+ cut their stated production by 2MM b/d. They were already underproducing, missing their August production by 3.58MM b/d, according to Argus, so the actual cut may not be all that sizeable. Clearly, the market is concerned, though, based on price action. If you enjoyed this recent break in gasoline prices, don’t get used to it.

Energy in general is a real swing factor for inflation. I think it’s fair to call it the primary factor for why inflation dropped to the extent it did, this summer. Unfortunately, that break is starting to look like it may be temporary. The OPEC+ action has helped send oil prices from lows of around $77 back up to $93 (see below.) That’s still well off the highs of $126 from earlier in the year, but it’s headed in the wrong direction.

Natural gas shows up on a lot of utility bills. While it can be highly volatile and is well off of YTD highs of $10, it’s still up 73% YTD, as it’s really moved up over the last year. That’s another sign inflation isn’t going to go away easily. Goldman Sachs believes the Freeport LNG export facility should be fixed soon, so more gas should be heading back to Europe. That could light another fire under gas prices, so to speak.

Employment data also didn’t help the bull case. Nonfarm payrolls beat for the sixth straight month. That’s great for workers, but not the stock market, because the tight labor market is telling the Fed they need to tighten further. it seems like every aspect of the labor market is above the pre-Covid trend, whether we talk about payrolls, hourly earnings, or labor income. While job openings weakened notably last week, they’re also still above the old trend.

The combo of increasingly sticky inflation signs and employment strength is raising market expectations of Fed rate hikes, which in turn is hurting the market. 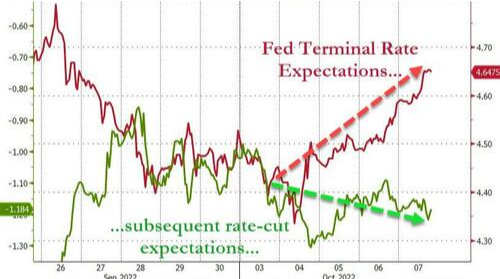 We can see that in what’s starting to look like a flood of earnings warnings. FedEx warned again, Samsung announced a 32% drop in quarterly earnings on Friday. Levi’s lowered earnings and margin guidance, citing currency effects. Hasbro warned, citing weak sales. AMD warned, citing weak demand. That’s just a quick scan of highlights from the last week, and we haven’t even hit the main earnings season.

There was certainly a hope that we could see unexpectedly good earnings like we saw last quarter. Considering nominal GDP is still strongly positive, with the BEA expecting Q3 to be 8.5% and employment costs seem to be lower than that, it wasn’t an unreasonable thought. However, it seems the headwinds from Fed tightening are too strong to fight, at this point. It’s still possible we could be positively surprised, but that’s starting to look increasingly unlikely.

What should we do with this increasingly toxic-looking brew? Generally, we want to look for opportunities. For instance, last week, while investors started to price in hopes for a Fed pivot, we took advantage by selling some assets that bounced up on that stance, while instead moving towards stocks that should do relatively well if the Fed disappoints investors with no pivot. Specifically, we got out of some Treasurys and precious metals stocks that would do well in a pivot, and went towards utilities, which should outperform the market on continued hawkishness and have been beaten down, of late.

Next week we’ll see more earnings and CPI data. It seems unlikely that either will provide relief for investors, but it pays to keep an open mind. Ultimately, the most likely scenario seems to be a string of bad data. While it’s not a great situation, the bulls’ best bet may be to hope something breaks badly enough to force a Fed pivot.

You certainly can’t try to front-run something like that, though investors sure seem eager to try. We need to at least see some sign of Fed worry, probably coupled with some moderating inflation. Just based on base effects, the good news is we may be able to see that in the October data, the bad news is we won’t see that data until November 10th, and a lot of bad can potentially happen between here and there.

Thus, we’re trying to be very cautious. At some point, the Fed will pivot, but right now, we need to focus on getting to that point with as much capital as we can, while keeping an eye out for the Fed blinking. That seems unlikely to happen anytime soon, though.

Ultimately, we’ve been concerned that the environment is likely to stay negative for a while, and everything that happened last week confirmed our fears. At some point, conditions will improve, but right now, there isn’t even a whisper of that. I wish I had better news, but it’s better to face reality, rather than try and warp reality to your desires.

I still believe that most likely, at some point this quarter, we will have a much better environment to invest in. From there, we can potentially do quite well. We can’t overlook that the economy is still fairly good. If the Fed were to take their foot off the brakes, that’s potentially a scenario for a Goldilocks-type environment, at least until all these rate hikes and QT have more of an effect on the economy. The next month may be rough, but in that scenario, a softening in the Fed’s stance could really light a fire under the market, at least for a while. We shouldn’t lose sight of that possibility.