A provocative title? As of Monday night, I show the Nasdaq 100 as down 25% YTD, the Russell 2000 down 21% and the S&P 500 not all that far behind at down 16%. Down 20% is a meaningless level, but that’s the magic number for a ‘bear market.’ I think it’s better to get ahead of any bear market before the bear market gets ahead of you. 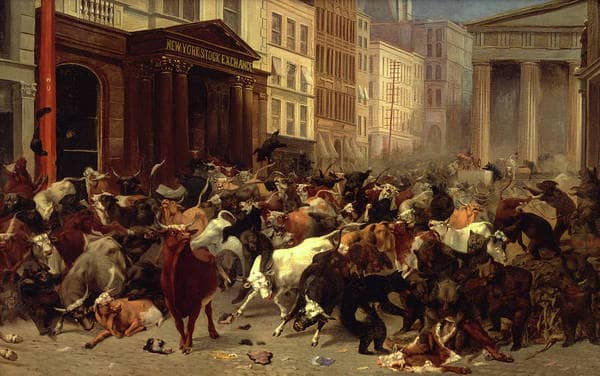 Every bear market is a bit different, but generally the primary focus is on preserving capital. Obviously market bulls can get beat up by the bear, but everyone suffers at some point. Bear market rallies are vicious. They beat up bears and get them to cover shorts. They also get others excited that the bottom is in, so they chase the rally, only to see those gains evaporate.

We saw a miniature version of a bear market rally last week, where investors seemed to be hoping for some form of a repeat of the March post-FOMC rally. Unfortunately for them, the setup wasn’t at all similar, and after a one-day rally, stocks broke lower.

What was the setup in March that created a strong, if temporary, rally? There were quite a few shorts, a big FOMC meeting, and options expiration (OpEx) was nearby. After the big FOMC event, put holders (betting on downside) saw no real reason to continue holding, so they monetized their holdings and didn’t elect to rollover positions into the new month.

Could we see that happen again on May 20th, the next OpEx? I’m no options expert, but I do try to follow along. Right now, I’d tend to say no, we won’t see a significant bounce, because we don’t seem to have a great deal of put exposure out there, at least not compared to March. I’d also like to see VIX get strongly backwardated again, where investors are paying up for near-term protection. That’d be a good sign fear is elevated. Backwardation is starting to shape up, so that’s a good sign for a rally.

While we’re not currently in a position to see a likely rally, that certainly doesn’t mean one can’t happen. With the market this volatile, I’d say there’s a broad range of potential outcomes. The problem is that I don’t really see a short-term basis, right now, to expect a strong rally.

What I’d like to see to start getting more constructive would be more puts bought, more downside, and more fear. That could happen in the next ten days, and if it does, we can start looking at taking action with preparing for a bear market rally.

What can be done? I’d say there are two basic actions.

First, once the rally happens, you can look at selling stocks you no longer want to own in the future. Bear market rallies are generally a great time to get rid of mistakes. Anything that’s been under pressure has a good chance of getting a decent bid on the rally that you can sell into.

Second, the start of a bear market rally can be a useful time to invest. If you want to stick to a longer-term time horizon, you probably want to stick to low beta, defensive stocks. If you’re willing to invest shorter-term, you can pick up riskier stocks. In March, there were plenty of riskier names that went up double-digits in a short span of time. Of course, you need to keep an eye on when the bear market rocket fuel is running out. Bear market rallies are temporary, and can deflate fast.

When could we expect a more durable, lasting market bottom? Right now, that’s likely a while off. In this highly financialized system, we likely need to see the Fed relax their tightening posture. That’s going to require significantly lower inflation numbers, which is probably going to take a while. Until then air is likely to continue coming out of the speculative bubble that was blown over the last few years. That doesn’t mean we absolutely have to get keep going down fast, just that a lasting uptrend is unlikely to start soon.

Currently, at least, low beta defensive names and energy are still working, though I worry that energy may drop off. Nonetheless, it seems you can still find investable areas in the market, they’re just much smaller group than the market as a whole and are entirely different companies than those that had been popular performers in the last few years.

It’s entirely possible that somewhere in the back half of the year the Fed will relax and we’ll have a more constructive environment. We’ll be watching, but until then, we’ll just settle for what’s available, with an eye towards protecting capital.

A lot of the above was somewhat generalized, but how, exactly, do we apply it to the current bear market? First, what’s the primary problem that’s causing the pain? That’s often not an easy question, but in this case I believe the primary pressure point is rising real interest rates cascading down the system. As Alf of The Macro Compass newsletter eloquently puts it, long-term real yields have been moving sharply higher as risk premia is repriced higher due to aggressive monetary policy. This is very hard on risk assets, particularly in a system as leveraged as ours has become. Low rates over the years have created fragile institutions, and rising real yields are creating real problems. 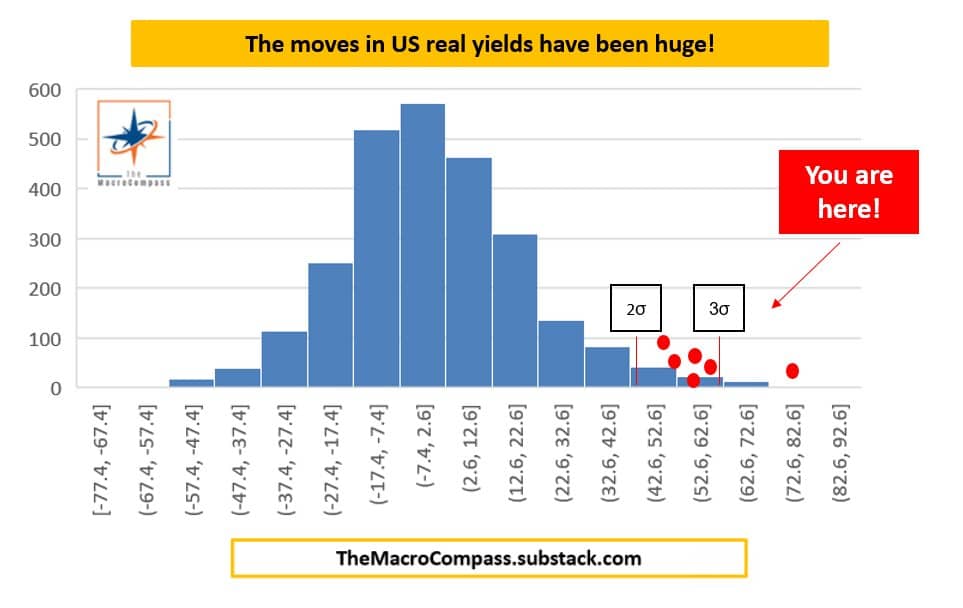 Pretty clearly, then, we’d need to see a break in the upward charge of real yields to look for improvement in risk assets. We started to see nominal rates relax on Monday, so maybe that could be the start of something good? Do we have reason to believe we could see a helpful trend?

On Wednesday, we’ll see April CPI. Expectations seem to be that we’ll actually see a lower headline CPI than we saw in March, which would be the first time in quite a while where we’ve seen a slowdown. That’s another case where one datapoint doesn’t make a trend, but in combination with long-term Treasurys hitting some big resistance levels, could we see real yields at least slow their rate of ascent or maybe even head back down?

That’s a scenario that could break a relentless bear market, at least for now. To add to the excitement, the following Wednesday is OpEx, where options positioning can change dramatically. OpEx has been a key event many times over the last few years, so it’s always worth noting, at least as long as the options market stays so big and important.

Put simply, I think we have a scenario where we could see a bear market rally begin late this week or next week. How will I handle that?

We already started putting a tiny amount of money to work last week in very safe investments (utilities, in that case.) As we test resistance levels (4,000, for instance,) we are likely to continue to drip money in. If the market really starts to crack and get stressed, we may get more adventurous. Long-duration tech stocks, for instance, have been hit very hard, of late. Might we want to put some amount of money there if we have reason to believe real yields will stop being such a major source of pressure?

In that way, we can get more invested as the market falls. When the market bounces and stress is relieved, we can prepare for the next play. Do we want to keep all of those stocks? Are there some we want to get rid of? The idea is to have optionality going forward. If by chance the market does continue to fall apart, we shouldn’t be in overly bad shape, as we’ve mostly been adding safer stocks. In the event we are surprised by a continued decline, we can make the determination of what we should continue to hold.

Obviously, this remains a dangerous market. That said, buying from others while they’re panicking often works quite well. I’d like to see more panic and stress before we can get really constructive, but even now I think it makes more sense to keep adding. Times like these are why we have cash at the ready, so we can take advantage.