First, let’s quickly go over the quarter. Stocks broadly peaked the first day of the year, and it seemed like the more addicted you were to liquidity, the worse off you were. Liquidity was already expected to decline, with a seemingly leisurely taper of the latest stimulus. Unfortunately, inflation proved to be far stickier than hoped, along with a war in Ukraine further complicating commodity prices. This suddenly made the need to reduce liquidity of primary importance.

Fear built on itself, and we quickly saw double digit declines in major indexes, along with a great deal of put protection being bought in front of the March options expiration (OpEx) and the first Fed rate hike. This proved to be peak negativity, as once we crossed OpEx, and then the rate hike, the market relaxed. If nothing else, it seemed there was nothing more incoming that really needed hedged. The worst seemed behind us.

So where are we now? Coming off those major events seems to have ended us up with largely neutral market positioning. Very little is particularly overbought or oversold. According to Nomura, this recovery was spawned by a covering of shorts, which in turn created some systematic buying. Additionally, the bounce brought out the aggressive retail call buyers again, which is a big part of why we’ve seen popular meme stocks get some extra juice.

Bank of America believes that short covering is just about done. Additionally, implied volatility (iVol) has been crushed down to the long-term average, and way below realized volatility (rVol.) Said simply, markets suddenly appear quite complacent. Is that merited? That’s been the basic fight for investors, as some people insist this is just a bear market bounce, while others are at least tentatively thinking we may have seen the lows for the year. I guess I’d just point out that’s what bear market bounces tend to do. They suck people in, shake them down, and spit them back out. Over and over again.

I also think you can point to a lot of troubles. The economy is slowing down, with the current Atlanta Fed GDPNow estimate for Q1 at 1.5%, much slower than last year’s growth. Inflation is strangling the consumer, and consumption is 68% of the economy. Yield curves are inverting, indicating increased recession risk. 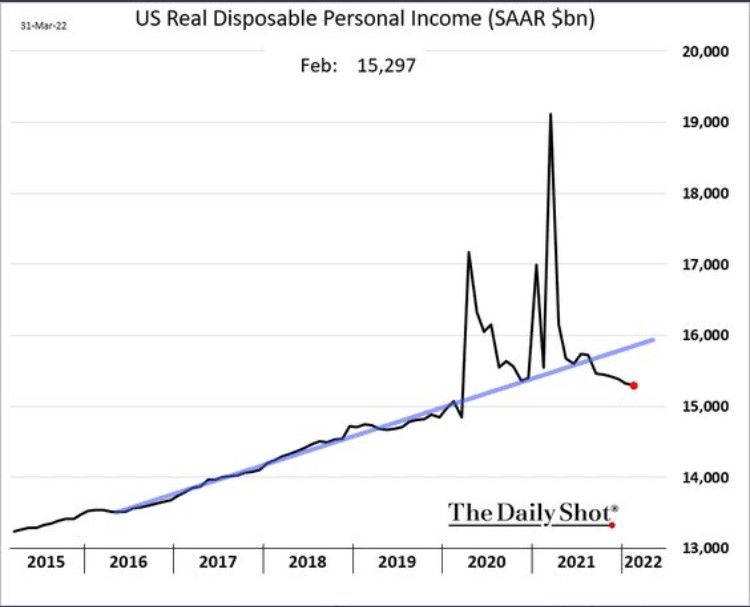 It seems investors are starting to agree we at least may have gone too far too fast, as Friday started to see put buying come back. For that matter, the last time we had ‘weaponized gamma’ option trading should still be pretty fresh in people’s minds, and they should know that happens. When the frenzy dies down, the stocks crash back to earth. The race for the exits on that game should start quicker and harder, this time around.

The next month lacks an obvious directional catalyst, until the May 4th FOMC meeting. Presumably earnings season could cause chasing one way or another, but which way is that? Will the retail frenzy force people to chase, or will margin and maybe sales pressures create a rush for the exits? Given the positioning, I would think the latter is more likely than the former, but I could easily be wrong.

What to do? I always keep in mind what things look like farther out. If you accurately invest with an eye towards the long term, you should get back inline with the market eventually. In this case, we’re taking liquidity away from a liquidity-crazed monster, and that can’t be good. Consumer confidence is in the dumps. We’re seeing signs growth is slowing. At some point, that needs to be priced in, so I would use any decent opportunity to get into assets that should do well in that environment and get out of what should do poorly.

Admittedly, the details of that can be tough. For instance, long-term Treasurys should do well if the economy slows, but if inflation is too high, they can fail to protect portfolios. Buy? Now? Utilities should do well in stagflation or deflation, but they’re also very near all-time highs? Buy now?

I think it is possible for the market to move higher in the shorter term. We could see a Ukraine resolution, earnings could be met with optimism, or the new retail frenzy could continue. Ultimately, though, more trouble seems like a matter of when, not if. The very basic problems of tightening liquidity and slowing growth seem both unlikely to change course and broadly damaging to a range of stocks. Even if you’re only looking at this quarter, it seems reasonable to think we’ll at least hit some amount of trouble during that time.

Lastly, it’s worth noting we’ve moved from a market that was very smooth, trending, and easy to deal with to one that seems much more ferocious. There are times, like the last few years, where it paid well to play offense, to be aggressive. The market we’re in is starting to growl, and that seems unlikely to stop for as long as inflation is the primary problem. Times like now demand defense and preservation of capital. Those need very different behaviors than the market is used to, and a lot of people are going to find it very hard to adjust.