April was the worst month for the Nasdaq since 2008. The S&P 500 had the worst monthly performance since the Covid shock in March 2020. The indexes are actually masking broader pain, with 45% of stocks down more than 50%, and 22% of stocks down more than 75%, according to The Market Ear. Bonds are no help, as the US bond market is having the lowest drawdown since 1980, at -11%.

Has there been enough pain that we can look for a bounce?

According to BofA, there have hardly been any outflows, at least compared to the massive inflows last year. In terms of how bad it can get, what happens if people start selling? Put differently, the $1.1T inflow into stocks since the start of 2021 have an average entry point of 4274. Right now, the average buyer is underwater. There have been outflows the last three weeks, but nothing compared to the inflows we’ve seen. QE in the last two years added $11T. What happens as that gets unwound? 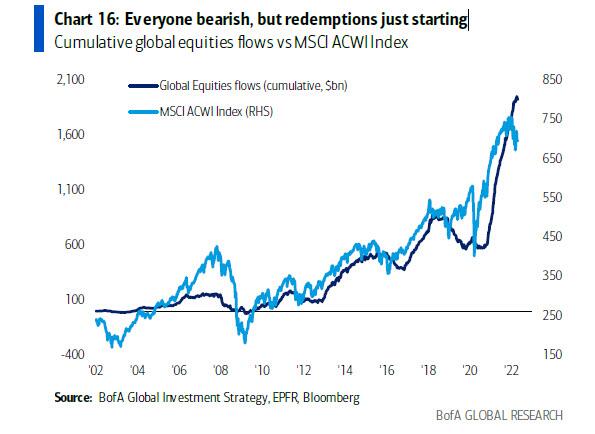 Unfortunately, it’s hard to get overly positive right now, as positioning doesn’t seem bad enough to merit a lasting bounce. Risks are skewed to the downside.

Ultimately, this environment is hard and unpleasant. Even with that rough end to the week, investors still look out of position, based on options exposure. I’ll probably never make a short-term crash call, but this positioning is conducive to more downside.

In March, we had a nice bounce as hedges were unwound when Options Expiration happened right after the FOMC meeting and iVol was much bigger than rVol. We’re not seeing that setup, here. OpEx isn’t until 5/20, and that extreme fear we saw in March just doesn’t exist this time. Honestly, it seems books got flatter and people are watching more than shorting. We lack the clear options fuel to drive us higher right now, even after the ugly end to last week.

This week is busy in general, with lots of macro data, the FOMC meeting, Russia likely defaulting on debt, along with a lot of Fed speakers coming out on Friday. It’s difficult to see all that come out as positive, but perhaps that’s why the market was so weak as last week progressed, and some of that potential pain has already taken place.

The GDP report last week obviously wasn’t great, but it also probably wasn’t really as bad as the headline number. Personal consumption, the heart of the economy, actually held up pretty well, as you can see in the chart below from The Washington Post. Looking at something like UMich Consumer Sentiment, the consumer is also indicating that inflationary pressures aren’t as bad, something which was corroborated by PCE data. To put all that in English, could the consumer continue to keep the economy chugging along? That core of GDP looks better than the headline data. 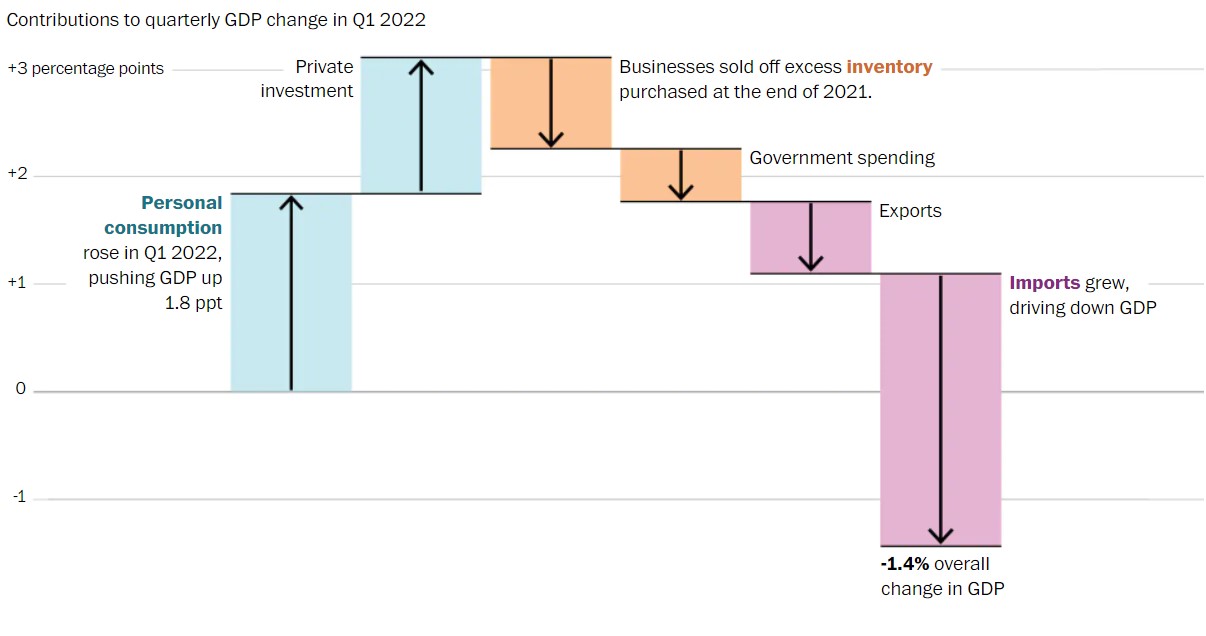 At some point, and maybe quite soon, inflation could slow quite markedly. Eventually, growth also is likely to slow, as we comp against the stimulus numbers. While that’s likely to mean longer-term tough sledding for the sort of risk assets that did great during Covid, currently the environment still looks friendly enough to invest in the low beta, quality names we’ve been pushing into this year.

Given all this, I’m more interested in preserving capital here rather than risking it. I’d also say that we’re entering a scenario that’s likely to be much more friendly to long term Treasurys, as inflation and growth are likely to slow. That may be soon, that may take a few months, but it’s good to be aware that Treasurys, and similar assets, are likely to do relatively well as the year progresses. We’re starting to see the huge Treasury short position in the market go away, according to CFTC data, and anecdotally we hear about larger institutions adding to long-term Treasurys. It wouldn’t really take all that much for LT Treasury performance to markedly, and potentially rapidly, improve.

At the same time, I’d also say the details of the GDP report say the economy isn’t yet doing that badly. I still think it’s reasonable to believe the 5/20 options expiration could lead to a pretty good rally that we could use to temporarily hold riskier assets and to use as a springboard to get out of any riskier positions we probably don’t want to hold as economic comps get tougher.

To be fair, Goldman Sachs’ Tony Pasquariello is constructive on the current setup. His basic reasoning seems to be that the companies that reported can restart buying back their stock, sentiment is bearish, and a new month should bring new stock inflows.

Further along his thoughts, could we see monetization of puts after the FOMC event? Possible, but we still have plenty of other events to deal with. In this case, the most important are probably all for Fed heads talking on Friday. Inflation is job numbers 1, 2, and 3 for the Fed right now, so they are unlikely to say anything particularly accommodative.

How do we synthesize all that? 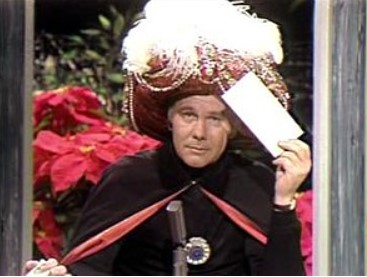 Obviously, I don’t have all the answers, but I can make some educated guesses. First, we more or less touched YTD lows on the SPX on Friday. That seems like a reasonable spot to expect some amount of bounce to start this week. At any rate, if there’s going to be a bounce, now seems like the appropriate time.

That would mean, though, that already mediocre positioning won’t be in great shape when the FOMC decision is announced on Wednesday. Given where we are now, I’d expect the FOMC decision to get sold, and if the market doesn’t interpret the decision ‘correctly,’ we have multiple Fed speakers on Friday to reinforce the message.

I continue to maintain the clearest time to get a good rally is around 5/20 OpEx. If all the above is roughly correct, we should be in good position to have a pretty good rally at least as good as what we had in March. The economy still doesn’t look all that bad and investors still seem eager to take risks. That rally won’t last forever, as it’s going to take a while to deal with inflation and interest rates, but it’s likely to at least get some people pretty excited.

Obviously, I could be quite wrong on how the market develops, and I certainly wouldn’t bet the house on these relatively short-term moves. Longer-term, dealing with elevated inflation and interest rates is likely to be hard on markets for a good while, and we can’t lose sight of that. In general, while other factors can work for a time, low beta defensive stocks are likely to be a top bet for a good while.