To cut to the chase, the Fed is now in a no-win situation. They waited way too long to remove a highly accommodative stance. Now they’re basically stuck hiking rates into (arguably during) a recession. That’s certainly not position A for policy.

The Fed always gets free advice from the peanut gallery, but now that advice is all over the place to an unusual extent. While a 75bps hike seems certain, some say the Fed should hike rates by 100bps this week, with the idea that they need to crush inflation to make sure it stays on a lasting downward path.

Others, like DoubleLine Capital CEO Jeffery Gundlach, say a small, 25bps hike makes sense. His concern is that rate hike effects have an effect slowly and over time. Very broadly speaking, it’s considered to take roughly a year, plus or minus six months, to see the full effects of rate hikes. Gundlach says many oversize rate hikes in a row without pause could lead to unexpected consequences.

Similarly, Elon Musk is advocating for a 25bps rate cut. His concern is that “a major Fed rate hike risks deflation.” While that may sound crazy now, considering rate hikes take a long time to take full effect, the idea of deflation next year is within the realm of possibility.

The fact is, the Fed is locked into hiking rates. While I agree with Gundlach and Musk that the Fed is probably making a mistake, realistically I don’t think they can do anything about that, now. Imagine they did pause, or had a small rate hike, or even cut rates. We now have a highly financialized economy. Markets would soar and inflation would reaccelerate. You’d be more or less certain to recreate the inflationary trouble of the seventies, except it would be worse, as our demographics and room to revitalize the economy just aren’t there. Failing to have a big hike now would just create worse problems for longer.

Is it safe to make a recession call? Previous to the August CPI print, I said there was a 20% chance of a soft landing. On the one hand, I thought that was overly optimistic, but on the other hand Wall Street was far more bullish than I was, and I lacked the solid confidence to shoot more strongly against that.

After August CPI showed a failure of inflation to continue a trend lower, odds of a soft landing are now vanishingly small. To be honest, I don’t see how the Fed and economy can really manage a soft landing, but I’d say the market doesn’t yet agree.

We’ve seen some amount of soft data, more so in surveys, but in general, the hard data still isn’t all that bad. Nonetheless, we are starting to see enough weakening data, such as the latest Core Retail Sales numbers, to get the Atlanta Fed GDPNow 3rd quarter estimate from 2.6% to 0.5%. It’s likely accurate to say we haven’t seen particularly weak hard data… yet. 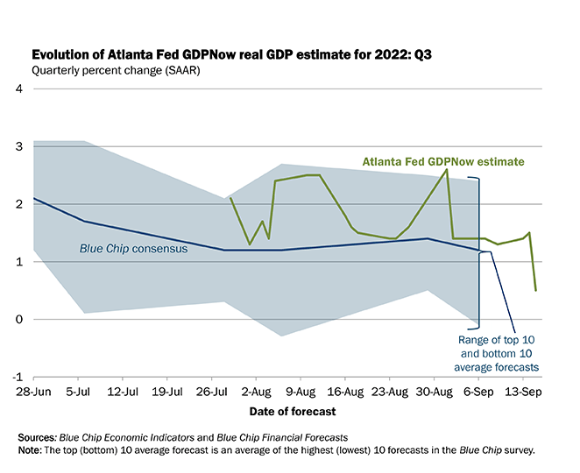 We’re really starting to see evidence pile up with corporations, though. An excellent organization like Amazon warned they had bloated inventory and staff months ago. Many other tech companies also announced hiring freezes and layoffs.

The problems seem to be accelerating. Just last week FedEx dropped a bomb on the markets by cutting their Q1 guidance deeply and withdrawing guidance for the year, citing global weakness. As their CEO said, “FedEx is a reflection of everybody else’s business.” So, such weakness there isn’t a good sign at all.

Last week also saw General Electric cut cash flow guidance and three large chemical companies (Huntsman, Eastman, and Dow) all cut guidance. With the bulk of earnings season coming up in October, will we see more companies give up on what seemed like awfully optimistic guidance?

It’s important to remember Milton Friedman’s quote up above. The Fed actions today can have an impact in about a year, and we’re already showing increasing signs of slowing. That makes the future look potentially bad.

We’ve received a lot of important information over the last week, but none of it is good for markets. Inflation seems more persistent, and the economy is looking more questionable. Thus, the mix of possibilities for asset markets moved downward, which should be clear, given the performance we saw.

A recession seems very likely, and with that, we should expect to see increasing news of shrinking margins, earnings weakness, and job losses. Fortunately, we were pretty well positioned for events, but this is a situation that is likely to see higher volatility. It’s much harder to post lasting gains while financial conditions are getting tighter, and profitability is shrinking. Right now, capital preservation is job number one.

We can’t just cash out of the market and go to sleep, though. Bear market bounces can be vicious, and quite remunerative if dealt with well. The problems above can create tremendous stresses, which in turn can create tremendous opportunities. How can we position ourselves well? That’s a very tough question, and chances are that no one can get it exactly right. I’ve been here before, though, more than once, and have managed reasonably well. Next week, I plan on giving a good answer to how we are positioned, why we’re positioned that way, and what we’re prepared to do going forward.