For those who think I may have lost my mind, first, you may be right. Second, the phrase in the title comes from the crypto world. My understanding is that it’s the idea of wanting to know when Bitcoin hits $100,000 or whatever magical price and then Bitcoin people have the money ready to buy a Lamborghini.

That’s a perhaps simple-minded take on investing, but I think it also captures the zeitgeist of the times. The Fed started lowering rates in the Eighties, and from then on, the answer to every problem seemed to be lower rates. Eventually, we hit the lower bound on that, then we resorted to printing money, then giving it away.

That process seemed particularly clear in the leadup to Y2K fears, then again coming out of the 2008 Great Recession, and lastly with the COVID crisis. The entire investing world has become very used to easy money at any hint of stress, and that has led to the ‘Wen Lambo’ question, where it’s taken as an article of faith that Santa Fed will always swing by with free money for the good little boys and girls of Wall Street. 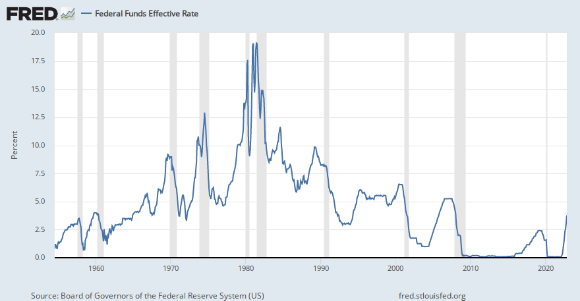 Last week, we talked about having a consistent process to look at the environment and why we don’t see a need to chase recent upside. The basic idea is that nothing has changed, and we expect this pivot talk to end like the other pivot calls we’ve seen this year.

To quickly underline, the Fed is still engaging in QT and rates are still rising. While investors seem to be hoping for a pivot soon, the Fed has stated hikes will continue into next year, and they don’t plan on bringing rates down anytime soon.

This means the market is more dovish than what the Fed has stated. Despite increasing stress, the market is quite complacent, a stance that hasn’t worked in the recent past. We talked about some of these problems last week, but what could make the market bullishness correct? How could I be wrong?

As a practical matter, the most interesting thought is probably the idea of China reopening. That would presumably help reaccelerate the global economy. Presumably, that would also help the dollar crash (as the yuan strengthens) and act as stimulus.

While that may create some short-term upside, it also creates some obvious problems. First, reopening such a huge manufacturing hub would greatly increase economic activity, which presumably would make things like oil soar. It would reenergize inflation, which ultimately would lead to rates being higher for longer, sowing the seeds for a deeper recession.

Plenty of people have been confused by China’s zero-COVID policy. How dumb is that, right? Jeff Snider of Eurodollar University has a take on that which I think is both insightful and accurate.

Basically, Snider points out China is a Communist country. Communism was never meant to compete with Capitalism. Instead, the traditional Communist plan is to adopt a limited form of Capitalism to steal technology. Along with the rest of the world, that transformation has been struggling since the Great Financial Crisis, and they’re basically stuck.

Xi has stated that instead, they’re going to focus on the development of science and technology to meet the needs of the nation. In order to get there the authoritarian regime needs to clamp down on dissent. They explicitly don’t want to go down the failed Communist path Russia went down. The COVID lockdowns are demonstrations of political authority. According to Snider, as the rate of economic growth goes down, the rate of authoritarianism goes up. It at least serves as an explanation of the zero-COVID policy, something that few seem to have spent time on.

If China reopening is a somewhat unlikely savior, particularly in the short term, what else can save us? To me, the other clear near-term alternative is a crisis. The US is very financially centric. The Fed seems to think they can manage a relatively controlled decline of financial assets, but we start to hear soothing tones when the crash gets too harsh. If we were to see a sharp decline, are we at, or approaching, a point where the Fed could actually pivot, at least temporarily?

I really don’t know, but I’m open to the possibility. To be clear, when I say a pivot, I mean the Fed would start having FOMC meetings with no hikes. A slower pace of hikes hasn’t traditionally been considered a pivot; whatever eager investors currently insist on. We’d likely have to see a sharp decline to see a real pause, though, like the S&P 500 being shocked down to 3,000.

What could cause that? It’s hard to say. Something like China invading Taiwan? What would something less dramatic do, like a higher-than-expected CPI report on 12/13 and a hawkish FOMC meeting on 12/15? Again, I really don’t know, but elevated CPI and a hawkish Fed seems like a pretty reasonable future.

What I do know is that we’re back to being awfully complacent. VIX is down towards the lows of the year (the vertical black lines below show when VIX previously got low.) The lack of sustained response to Friday’s payrolls report shows investors seem more concerned about the upside than downside. Clearly, there are a lot of investors out there that want a year-end rally. 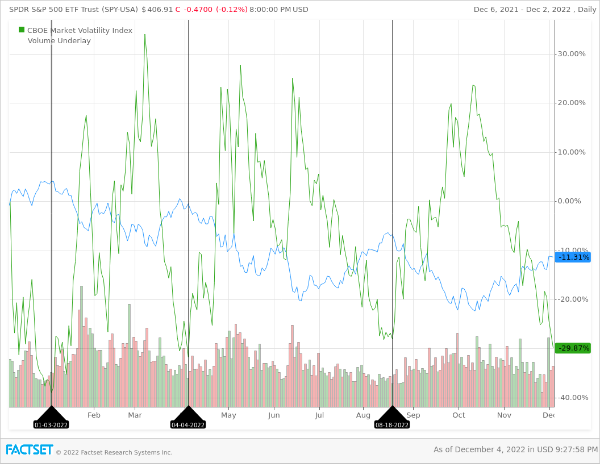 In broad strokes, the effect of tightening hasn’t gone away. We see deteriorating areas of the economy, particularly in financially sensitive areas like housing and autos. Over time, that will have an increasing effect on the economy, if history is any guide.

The basic question for investors right now is if we can get a rally in the period between now and when investor focus shifts to recession risk? Right now, the economy still looks OK, which is probably the biggest reason why we haven’t seen a larger drawdown. Historically, recessions are tough on markets.

I still believe we could get a good, investible bear market bounce at some point in the next several months. The biggest thing we’d need to see, though, is for fear to create a rush for the exits and give us good prices. Thus far, investors have eagerly and aggressively grabbed at declines. Can we finally exhaust bulls at some point in the next few months to get reasonable pricing? We’ll see, and in the meantime, we can acknowledge that all these inverted yield curves, weak oil prices, and so on are strong indicators that worse is likely coming, eventually. Whatever happens, we certainly don’t want to lose track of eventual risks.