A lot has already been written about Europe’s energy chaos. My hope is to just have a simple rehash of what the basic problem is from a market (not geopolitical or governance) perspective and how it affects what we do.

In a nutshell, in response to sanctions, Russia halted flows through the NS1 pipeline. It appears we’re now at a stalemate, where the West won’t lift sanctions and Russia won’t send gas. Energy prices such as utility bills are going up several fold, creating great economic pain.

Perhaps it’s unsurprising that in this highly financialized world, a lot of the big issues here are really financial issues. Massive spikes in electricity costs are leading to huge margin calls, which Equinor estimates at 1.5T EUR. That’s why the ECB is focused on providing support for banks, as several face demands to suddenly use 30-40% of their entire balance sheet. 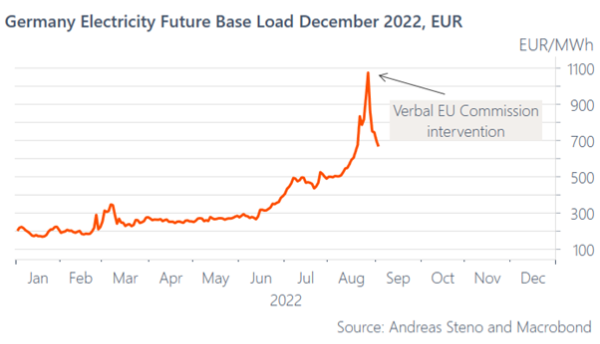 Meanwhile, the European Central Bank (ECB) is fighting the inflation monster that’s become reenergized from this mess. Inflation for the region was a record 9.1% for August, with energy inflation at 38%. While the ECB hiked rates by 75bps, they were unwilling to forecast a sharp decline in GDP and upped their 2023 inflation forecast to 5.5% from 3.5%. This indicates they’re not all that serious, at least yet, about quashing inflation, choosing instead to support their economy.

It’s very early in this mess, but the economic slowdown is in the data already. France, Spain, and Netherlands all reported July Industrial Production which saw a roughly 2% slowdown. War, including economic war, is bad for business. Europe probably has enough gas stockpiled for winter, particularly if they are somewhat careful. A harsh economic slowdown seems all but guaranteed, with quick estimates at a likely minimum of a 5% drop in GDP.

In a lot of ways, for Europe, this is another COVID crisis. They’ll see a significant slowdown in GDP and plan on supporting their economies through stimulus. Clearly, that’s unfortunate for them, but how does that affect us?

That’s not a simple question. In a vacuum, we should recognize from the COVID crisis that stimulus provides a boost to asset prices, in the short term. It can also increase inflation pressures and lower the long-term growth prospects of an area, as the debt needs to be paid for.

Again, that’s just in a vacuum. This isn’t a coordinated, worldwide action, but a regional stimulus. There are also other factors to consider, like a rapidly slowing economy. On the one hand, there was the long-lived stimulus party of 2020, on the other hand, there was the one-month party in January 2001, where our market soared on Fed easing, then plunged the next month following horrible earnings and guidance.

In general, stimulus should make Europe relatively more investible, which we saw on Friday, with the Euro Stoxx 50 index (FEZ) up 2.85%. We should remember, though, that stress is high, and bad earnings are likely. Where are we between the 2001 and 2020 examples? Told you it was complicated.

But wait, it gets more complicated! What if the Fed does pause, or even just slow, hiking this year? The dollar has been absolutely soaring under these conditions (UUP Dollar Index pictured below,) and a change could act like a release valve. The dollar could go down sharply. Historically, that’s been great for foreign assets and commodities.

In the end, Europe has become much more interesting as a place to invest, but not necessarily in a straight line. We’re already invested in some high-quality companies there, and as values present themselves and global conditions change, it’s potentially a good place to add funds to. Data is likely to be horrible, though, so there’s no rush to get fully invested.

Lastly, inflation was going to be easier to quash if the effort to do so was globally synchronized. It appears there are definite limits to how far Europe is willing to go to fight inflation. That’s understandable, but it also helps raise the chances of inflation being stickier for longer. The Fed may have to pick up more of the inflation-fighting slack, meaning our economy may have to face more pain than it may have otherwise seen.

There is no easy, clear path forward. Given the environment, it’s easy to expect greater volatility, with assets soaring and crashing based on positioning and the latest news. This sort of analysis helps to prepare for the opportunities and problems ahead. We’re certainly trying our best for clients.