What Would You Say You Do Here?

What Would You Say You Do Here?

Clearly, things are getting exciting in asset-land. Unfortunately, exciting usually isn’t a good sign when it comes to asset prices. I think it’s fair to say we have been correct in expressing a nearly constant lean towards caution for the last several months. Unfortunately, the basic problem of runaway inflation continues. Inflation probably peaked but getting it down quickly just hasn’t happened. Does this mean we need to stay defensive for the foreseeable future?

At least to my mind, there’s no such thing as a good one-factor asset model. Inflation has been of primary importance for months, now, and we can see that strong focus affecting asset prices. That can change rapidly, though, particularly when so many are laser-focused on the same thing. We saw a taste of that with the UK budget/gilt fight. When the BoE panicked, suddenly inflation was no longer the sole concern.

The central banks aren’t all that different, and at some point, the Fed is likely to cause enough damage that they will bend their inflation focus to consider potential problems. For instance, last week, apparently the Treasury reached out to banks asking if they needed to buy Treasurys to support liquidity, which presumably would involve them selling bills and buying Treasurys to make the effect neutral. Biden also said he met with his economic team on the global economy and markets.

The point is, it may not be all that long before we see enough damage that the Fed panics, which can change asset market calculus. We don’t need to take any action right now, but we should be prepared.

The way I fundamentally look at this is a question of risk/reward. Eventually, the risk gets fully priced in, and at that point, you no longer have any reward left. Sometimes that’s temporary, and you get a bear market rally. The market resets, releasing pressure, then the pressure starts building up again. Sometimes, it’s the final blowoff, and the market doesn’t look back.

Take the Great Financial Crisis, for example. Clearly, there were existential problems in 2008, which were made at least somewhat better with the announcement of TARP to alleviate some of the basic stresses. This certainly helped relieve stress, but it wasn’t really the end, as the economic damage was already done. It did change the environment, though. From that point on, while the market ended up lower, it stopped pricing in fears of a new Great Depression. The broad market still suffered, but those existential risks had been fully priced in. What you should have invested in fundamentally changed. For instance, a quality sector like Health Care (blue line, below) largely followed the market down until TARP was announced in October, then expanded in November. Suddenly different factors mattered. 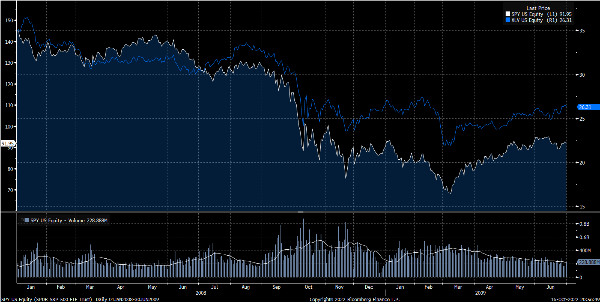 I certainly can’t guarantee that’s what will happen here, but I think we need to consider it. We’ve priced inflation fears to a level rarely seen. How much reward is left? Could we see enough stress that the Fed will change the rules of engagement? What could that look like?

Again, nothing has yet happened, and thus, there’s no need to change our positioning. All I mean to say is should we be all that shocked if at some point, we see some version of a TARP-like effect come around? That doesn’t mean the world is saved, as all these rate hikes and tightening will continue to damage the economy for a while, but the government is quite capable of a TARP-like change in the rules, and we need to be prepared for what that might look like and how it could change what we’re doing.